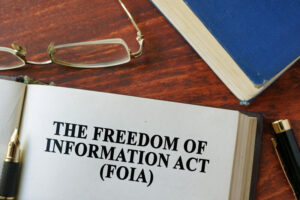 Background about the Case

As previously reported, I filed a lawsuit against the Fairfax County School Board in May, challenging its withholding of information I had requested under the Freedom of Information Act (FOIA).  See “Fairfax Schools Monitor Sues Fairfax Schools, Round 2,” May 27, 2002.   My FOIA request was for documents relating to the Board’s revised Controversial Issues Policy.   (This was my second suit against the School Board.  The first concerned a refusal to provide access to a videotape of a presentation by race-hustler, Ibram X. Kendi, for which the Board paid $20,000 for a one-hour Zoom call.)

I filed this second suit because the School Board blacked out portions of some documents I had requested, and withheld others in their entirety, claiming that they were protected from disclosure by the attorney-client privilege.  I could tell from the unredacted portions that the Board’s claims were extravagantly overbroad.  It seemed that anything with a lawyer’s name on it was being withheld, regardless of whether the document actually contained privileged communications from or to the Board’s legal staff.

When I asked the Board’s staff for additional information about the withheld documents, I was basically stonewalled, so I filed suit in the Fairfax County General District Court.  I asked the court to require the School Board to provide a “privilege log” to me and to the court.  I said the log should identify each withheld document with particularity, and should provide a justification for the alleged attorney-client protection.  I asked the court to review the log, and the underlying documents, to determine whether the Board’s claims were legitimate.

Proceedings in the Case

Shortly after the suit was filed, the Board’s legal staff suddenly became responsive.  One of its lawyers contacted me with a “Hey, we can work this out” message.  She suggested that the date for the court hearing be postponed so that the staff could re-review the documents.  I agreed.  After the review, the claim of privilege was withdrawn as to some documents, and those documents were given to me.

I was not satisfied, however, because it seemed that the remaining claims of privilege were still overly broad, and because the Board’s legal staff still wouldn’t provide a log that attempted to justify the remaining privilege claims.  I informed them that it would be necessary to go forward with the hearing date in court, scheduled for early July.

At that point, the Board hired an outside attorney.  He contacted me and asked for another postponement so that he could have time to look into the matter.  I agreed, and the hearing date was reset for July 27.  This attorney was more cooperative and more realistic than the Board’s in-house legal staff had been.  He gave me copies of additional documents that had been withheld up until then, and he agreed to provide the privilege log I had requested regarding the remaining claims of privilege, which had now been whittled down to a small group of documents.

When I received the privilege log a few days ago, I concluded that my few remaining questions did not warrant further litigation.  Therefore, I agreed to dismiss the case, and I did so today.

I ultimately received what I wanted, but only after persistent effort and not-insignificant expense.  But for the fact that I am a retired attorney, with knowledge of the applicable law, it is doubtful that the final outcome would have been the same.  Most citizens making requests for documents under the FOIA would not have the legal knowledge to question the Board staff’s claims of privilege, and even if they did, the expense of hiring a lawyer to sue would likely seem prohibitive.

The Board’s chief in-house counsel, John Foster, is an experienced lawyer and obviously knows the limits of the attorney-client privilege.  And yet, the staff willfully asserted overly broad claims, and refused to justify them, until a court challenge was filed.  Only then did they attempt to act in good faith.

The Freedom of Information Act is supposed to be a quick and inexpensive way for citizens to keep tabs on what their government is doing.  It can be a very time-consuming and expensive process, however, when officials try to bully requesters, forcing them to file court actions to get what they are entitled to.

It will be interesting to see whether the Board’s staff will be more circumspect before asserting privilege claims against the next FOIA requester.