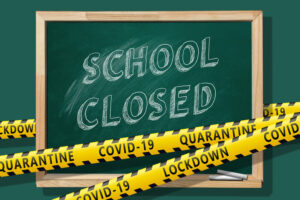 The outgoing and incoming presidents of the Fairfax Education Association — the labor union representing Fairfax County public school teachers — spoke at the July 14, 2022 meeting of the Fairfax County School Board.  Both expressed pride in their role in school closures during the Covid pandemic.  They painted themselves as courageous figures, doing what needed to be done in the face of stiff opposition, to keep students and teachers safe.

We know, of course, that classrooms were actually a safe environment during Covid.  Many private schools remained open for in-person instruction and were not breeding grounds for serious disease.  Even as the science became clear, and the pandemic eased, the union kept moving the goalposts to delay reopening.  Its actions were designed to make things as easy as possible for teachers, regardless of the collateral consequences.

The union officials gave no apology at the meeting of the School Board for the family disruptions caused by the school closings.  Even worse, there were no apologies for the learning losses that accompanied the shutdowns.  The effects were severe, as demonstrated by objective evidence.

The School Board adopted a Strategic Plan a few years ago.  It established, among other things, goals for eliminating achievement gaps among students in various racial, ethnic and learning groups.  The Board administers tests each year to determine whether the goals are being met.

The first row of data in the table below shows the percentage of students in each demographic group who met the reading standards for their grade level in the three-year period at the start of the Strategic Plan.  As can be seen, there were substantial differences at that time in the reading levels achieved by Asian and White students (91-92%) compared to Hispanic and Black students (69-72%), and compared to the  other demographic groups.

The goal of the Strategic Plan was to improve student performance in all demographic groups and to eliminate or narrow the disparities among the groups.   As can be seen, however, no progress was made in the first two years.  And then, when Covid hit, there was a substantial decline.  Comparing the 2018-19 school year to 2020-21 (no data are available for 2019-20), student progress in reading declined for every demographic group.  Thus, the percentage of students who were able to read at grade level was worse after the Covid shutdowns than it had been at the start of the Strategic Plan. 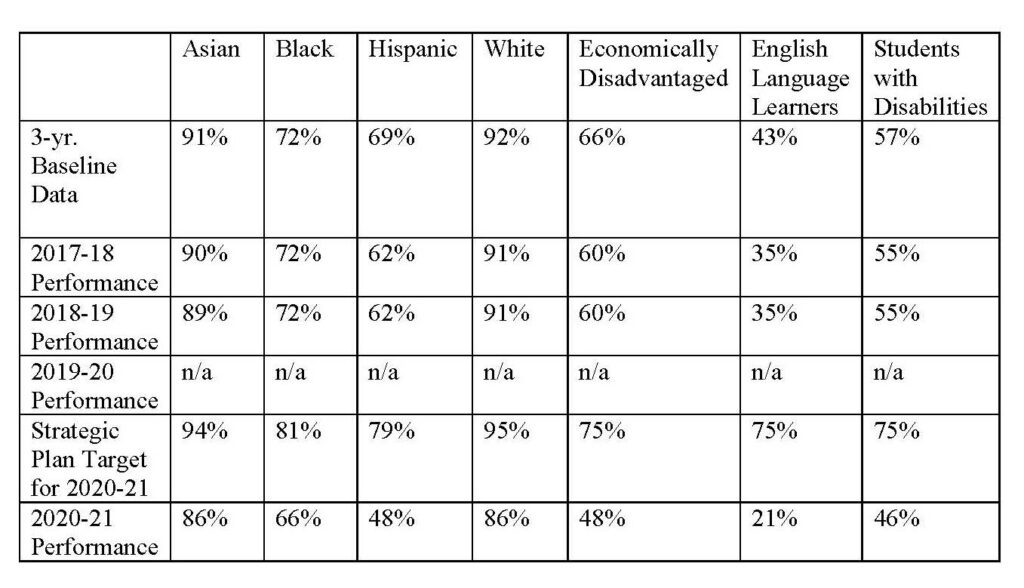 The obvious cause of the significant set-back in reading proficiency was that students were forced to study at home, in front of computer screens, rather than in schools where they would have interacted personally with their teachers and fellow students.

The school closures dramatically affected student achievement in mathematics as well, as shown by the following table: 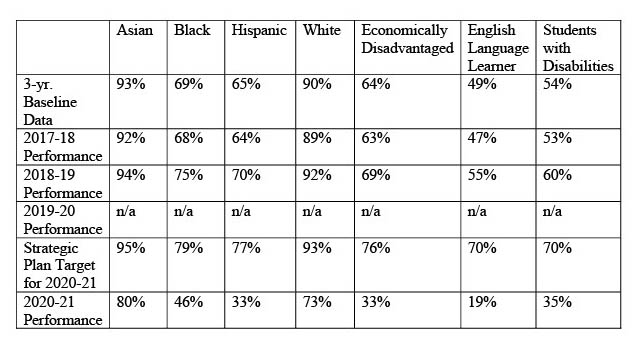 How long will it take for students to get back to where they should have been?

At the outset of the pandemic, there were several unknowns.  Some  educators might have believed in good faith that it was necessary to close schools to in-person learning in order to prevent a rapid spread of serious disease.  But it became clear before long that this hypothesis was not supported by experience.  Schools proved to be relatively safe places for cohesive groups to spend their days.  Children didn’t readily become ill or spread the disease in this environment.

So how can it be that the leaders of the Fairfax Education Association are still proud of what they did?  Their actions disrupted the lives of parents and dealt a serious setback to the education of children.  If this union is proud of what it accomplished during Covid, after seeing the serious negative consequences, it shouldn’t be permitted to be within a hundred yards of any Fairfax County public school.  That would be a fitting way of keeping these union bureaucrats safe from contamination by our kids.

The incoming president of the union stated during her July 14 comments to the School Board that she is looking forward to working with the Board in the coming year to get the union recognized as the bargaining agent for Fairfax County teachers.  (In 2020 the Virginia legislature enacted a law that permits labor unions to engage in collective bargaining with government entities such as school boards, if the public entity has adopted an ordinance or resolution authorizing such bargaining, and if the union has been duly certified as the employees’ bargaining agent.  The Fairfax Education Association is now lobbying the School Board to gain that status.)  Given the irresponsible way in which the Fairfax Education Association acted during Covid, it would be irresponsible for the Board to grant this union more power than it already has.

Of course, the ultimate decision to close schools to in-person learning rests on the shoulders of the School Board itself.  Voters will decide in November 2023 whether the Board’s handling of the pandemic warrants reelecting its current members.  But the Fairfax Teachers Association bears heavy responsibility for the shut-downs as well.

If you believe this post is informative and useful, please share it with others, and encourage them to register to receive notice of future postings.